Colchester is an interesting place, apparently the first city in England. It was founded by the romans as their english capital. It has a rich history including being the location of a big seige when the local Anglosaxons decided romans had gone a little too far. Boudica Queen of the Iceni led the revolt, she and her army sacked Colchester and left little of the roman ruins for us to enjoy today. As well as the castle, an ancient roman wall, and an interesting looking tower thing (Not quite sure where that fits in the history) there are some other attractions which I didn't get to see such as colchester zoo and a clock museum. To find out more about colchester have a look at http://www.visitcolchester.com/ and http://en.wikipedia.org/wiki/Colchester 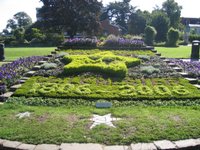 A manicured garden commemorating 200 years of "Twinkle Twinkle Little Star". Apparently it was written here in Colchester in 1806! 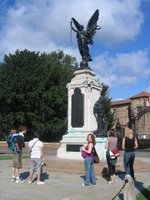 Our little party in front of a Statue in Colchester. 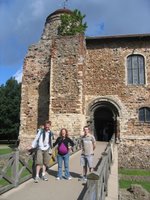 My Brother in law, Sister, neice and Me in front of Colchester Castle which was built on the ruins of an ancient roman temple. 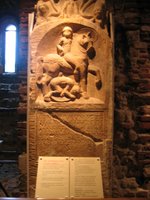 A tomb stone for a roman solder (inside Colchester Castle)
Posted by James at Monday, August 28, 2006